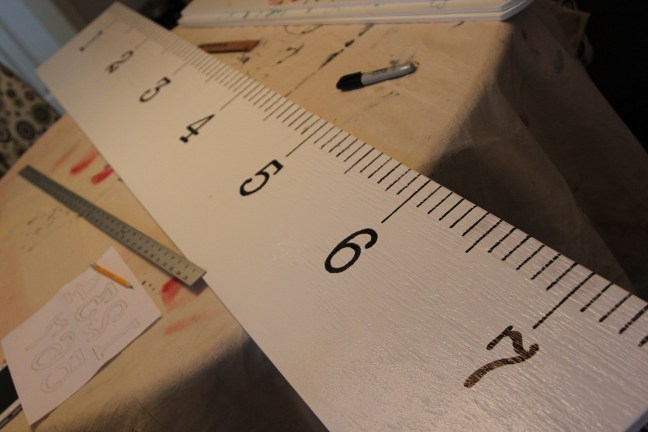 I’m lazy. And cheap. I like making stuff from stuff I have lying around, even though it’d turn out better if I went and bought nice new materials. Case in point, my legit new ruler height chart.

Solution: These super-cool giant rulers I see on Pinterest!

I can do that. What do I have? Oh, look… a big ole flat piece of plywood, saying ‘let me be your ruuuler.’ Perfect. Hey! Some white paint. Excellent. Let’s go. 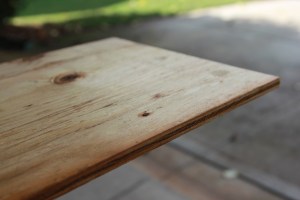 STEP ONE: Size. My plywood is already 10″ wide. (I’ve seen them 6″ up to 12″ wide, but IMHO, less than 6″ wouldn’t look sufficiently ruler-like.)How tall do I want this? Well, my husband and kids are freakishly tall, so I don’t want it to end before 6’6″.  My plan is to hang it 6″ off the floor, and have it end at 7’6″. I have high expectations, apparently. Measure twice, cut once! 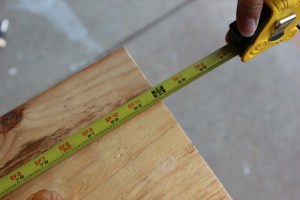 STEP TWO: Smooth. Sanded it down to make it as smooth as possible. I think sanding actually makes plywood rougher. Oh well. (I’m cheap.) I also tried to round the edges a bit, to make it look klassy.

STEP THREE: Clean. Not gonna lie, I used my leaf blower to get all the dust off. (I’m lazy.)

STEP FOUR: Paint! My can of Zinsser is all dried out. Boo. But my can of BEHR Premium Primer+Paint is ready to go. Yay! And these rollers are meant for “smooth surfaces.” Psht. Whatever. Don’t you love “helpers?” Here it is after like 6 coats (I kept thinking one more coat would make it look smoother). You don’t need that many. 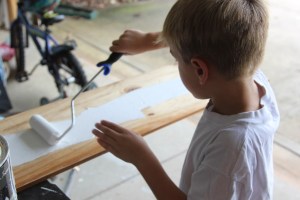 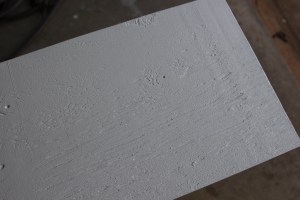 STEP FIVE: Sharpie. This part took longer than I thought. Anything you have to do with repeated precision over and over… ugh. (If you have thoughts on how I could have done this faster, I’m all ears.) Part of the problem was the uneven surface of the plywood.  And it ruined my sharpie. If I had a nice, smooth piece of hardwood, it would have been much easier. (Cheap/Lazy.) I keep telling myself it adds to the charm. I made the foot hashes and 6″ hashes a little longer than the little inch hashes, just a like a real ruler.

STEP SIX: Numbering. THIS process was great. Found an American Typewriter font, typed 1-7, made the font as big as would fit on a sheet of paper, and printed it out. I don’t really want to cut all these out to trace them. (Lazy.) Don’t want to go buy mailbox numbers instead. (Cheap.)

But I found that if you roughly pencil the outline on the back of the paper, then flip it over to the front and trace it with a bit of pressure, you’re left with a very nice carbon copy (actually, graphite copy) to guide you! BLOODY BRILLIANT.

STEP SEVEN: Hang it. This thing is heavy, so it’ll need to go into a stud. I hate trying to put something with a claw hanger at the right height, because I don’t have XRAY vision (also, lazy), so I’m going to drill a nice lil hole two inches from the top and put a big ole nail in the wall. It still wasn’t easy getting it on the wall at the EXACT right height. There may be a few holes hidden behind there… sorry, honey.

I hung it at the top of the stairs.

There. Finished. Well, except for remarking all of my kids’ heights up til now. But I’ll just let it stay pristine for a while.

Here’s what I messed up on, so you don’t have to…

If I did it again: